This text is from an article on Pennsylvania Historic Preservation by Cory Kegerise.

Travel north along Route 209 through the Delaware Water Gap National Recreation Area and you’ll arrive at the Borough of Milford, Pike County. The small town of nearly 1,200 full time residents appears like Brigadoon as you leave the lush forests of the Water Gap and has a long and layered history. Milford is also one of the newest Certified Local Governments in Pennsylvania with a lot of preservation success stories packed into a little place.

Situated on a bluff overlooking the Delaware River, Milford, as we see it today, traces its origins to the 1790s when the town was platted by James Biddis, Sr. Biddis was a circuit-riding judge from Philadelphia who had charge over the northern stretches of what was then Northampton County. Thomas Quick, a Dutch settler had arrived in the area around 1733 and established a gristmill, but it wasn’t until Biddis showed up several decades later that a proper town started to take shape. When Wayne County was split off of Northampton in 1798 Milford become the county seat. In 1814 Pike County was carved out of Wayne and the town became the Pike County seat. The village was incorporated as a borough in 1874 and the town’s name is a nod to its early associations with the milling industry.

The natural resources and picturesque setting of the Delaware River valley would be what really put Milford on the map in the 19th century, however. As word spread about the sweeping views and bucolic landscapes of this corner of Pennsylvania, tourists began frequenting the area. Milford was home to nearly a dozen tourist hotels in the 19th century, of which only a handful survive. The Hotel Fauchere is the most iconic of those remaining and continues to welcome guests to this day. Along with the tourists came entertainment, including appearances by world famous actress Sarah Berhardt and a number of early 20th century film productions.

Milford’s association with the Pinchot family and their legacy of natural resource conservation had a significant influence on the town’s development and continued prominence. Constantien and Marie E.A. Pinchot along with their children Cyrille and Hortense arrived in Milford in 1818 after fleeing France following a failed attempt to rescue Napoleon from St. Helena. Constantien amassed significant landholdings in the region and operated a number of successful businesses that generated significant wealth for the family. The family’s c.1850 Greek Revival homestead at Broad and Harford St. stands across from Forester’s Hall, built by Constantien’s grandson James as the Pennsylvania home of the Yale School of Forestry. Just outside the borough is Grey Towers, the National Historic Landmark home of Gifford Pinchot, founder of the U.S. Forest Service and former governor of Pennsylvania.

Beyond My Ken, CC BY-SA 4.0 https://creativecommons.org/licenses/by-sa/4.0, via Wikimedia Commons

The commercial core of the borough was listed in the National Register of Historic Places in 1997, and the historic district boundary was enlarged to include the residential areas in 1998. In 2000, Milford Borough Council designated the commercial area as a local historic district and appointed a Historic Architectural Review Board to help manage change in the downtown. The Historic Preservation Trust of Pike County helped to spearhead these efforts and remains an active advocate for preservation in Milford and throughout Pike County.

Milford has always taken preservation seriously and conversations about the CLG program began in 2019 following training provided by the PA SHPO. The Borough’s historic district design guidelines haven’t been updated since the ordinance was adopted in 2000, and both the HARB and Borough Council expressed a desire to revisit and update the guidelines for projects in the local historic district. Given the community’s longstanding commitment to preservation, the CLG program was a natural fit for the borough and an application package and grant application were submitted to the PA SHPO in Fall 2020. Following a few minor changes to the ordinance in early 2021, the certification was approved by the National Park Service on May 17, 2021, and work on updated guidelines got underway this summer.

Aside from the benefits that being a CLG will offer the community, Milford’s participation in the CLG program is notable for a number of reasons. First, Milford is the first CLG in Pike County, and the only community to participate in the program in Northeastern Pennsylvania. Most of the state’s CLGs are concentrated in the southeastern and central regions, and adding communities from other parts of the state is a priority for the PA SHPO. Milford was certified alongside Erie and Sewickely (Allegheny County), so we’re making strides in that direction! A second notable point is that Milford is the smallest, population wise, CLG in Pennsylvania. While the state’s largest cities are all CLGs, there are a number of smaller communities that have been certified over time. At just 1,200 people, Milford has shown that small towns can development and implement well organized and thoughtful preservation programs that rival even the largest places!

Hearty congratulations to the Borough of Milford, and especially the leadership of Borough Council Vice President Adriane Wendell and President Frank Tarquinio for pursuing certification and leading these projects! Welcome to the Certified Local Government program! 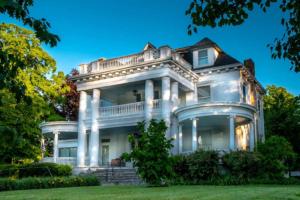